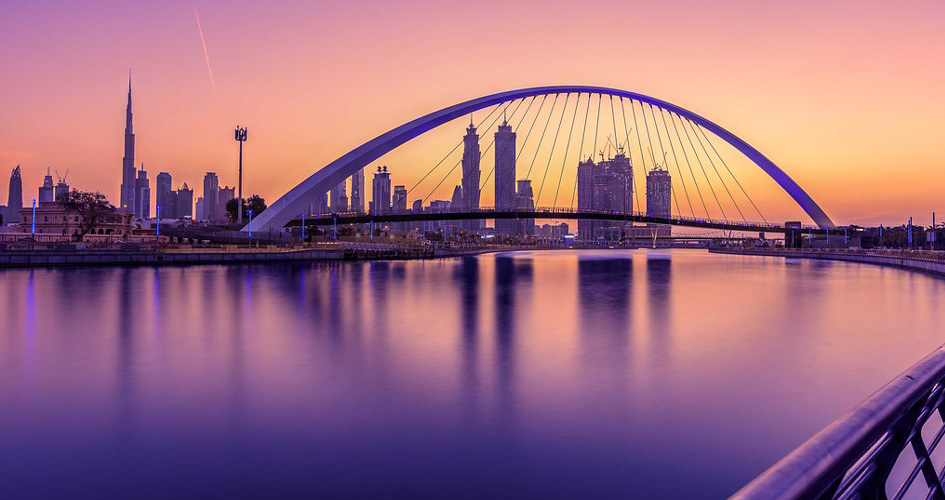 The Creek has nourished and witnessed the growth of Dubai from its earliest days. Recently, Dubai has opened the Dubai Water Canal, which is a billion-dollar extension of the quintessential Creek. It stretches from the old Creek and passes through the Design District and Business Bay to join back in the Arabian Gulf. On the course, it also cuts across the Sheikh Zayed Road.

The water canal took 3years and 2.7 billion Dirhams to build. The cost of building the Sheikh Zayed Road bridge over the water canal alone was half a billion dirhams. This project has essentially turned a large chunk of Dubai into an Island. This expansion of the Creek, called the Dubai Water Canal, is 3.2 kilometers long and will be playing an important role in Dubai’s future development prospects. Furthermore, Dubai has added another beautiful spot to its list of enticing waterfronts.

In early 2013, Dubai announced the commencing of the project. Three years later, the water canal was opened in late 2016. Being at the center of downtown, this is the best place in Dubai to view the stunning skyline of Dubai. Apart from being a tourist attraction in the city, the canal also functions as a means of transport. Dubai Water Canal is noteworthy for its excellent environmental friendliness. 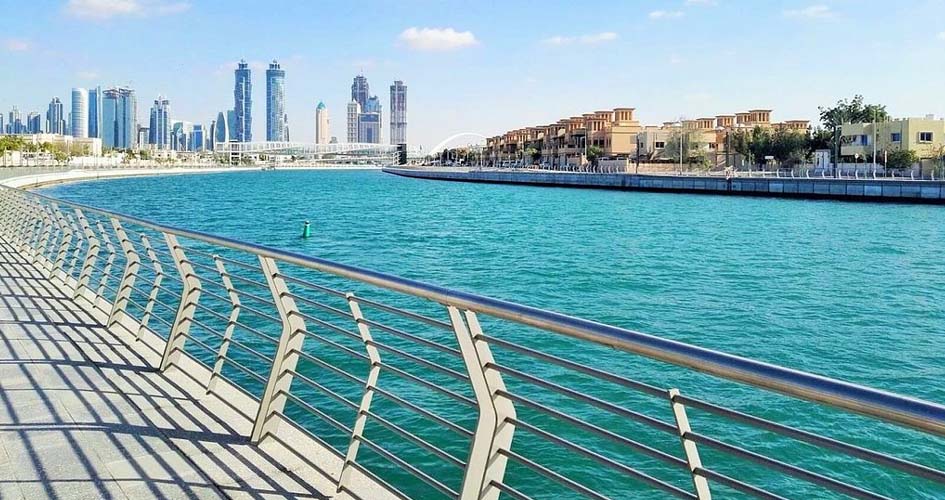 The canal is 120 meters wide in the widest part, 80 meters wide in the narrowest part, and is 6 meters in depth. There are a lot of things that attract visitors to the water canal area. There are more than enough things to satiate joggers, gastronomers, couples out for a romantic evening, families, and youth. You will regularly see many joggers and cyclists near the boardwalk. The 12-kilometer cycling track offers a risk-free and beckoning spot for riders, away from the traffic.

The soaring skyscrapers of Al Habtoor city are on one end of Safa park near Sheikh Zayed Road bridge. The construction of the Dubai water canal gave the Business bay a facelift making one of the main financial centers of Dubai also a tourist attraction.

One thing that sets this place apart is the meticulous care taken to make it as environmentally friendly as possible. Hundreds of street lamps and decoration lights across the water canal are powered by solar panels that charge up during the day time. These lamp posts also have mobile charging stations in them. Even when you are spending hours on end snapping pictures, you don’t have to worry about your mobiles and cameras running out of juice. 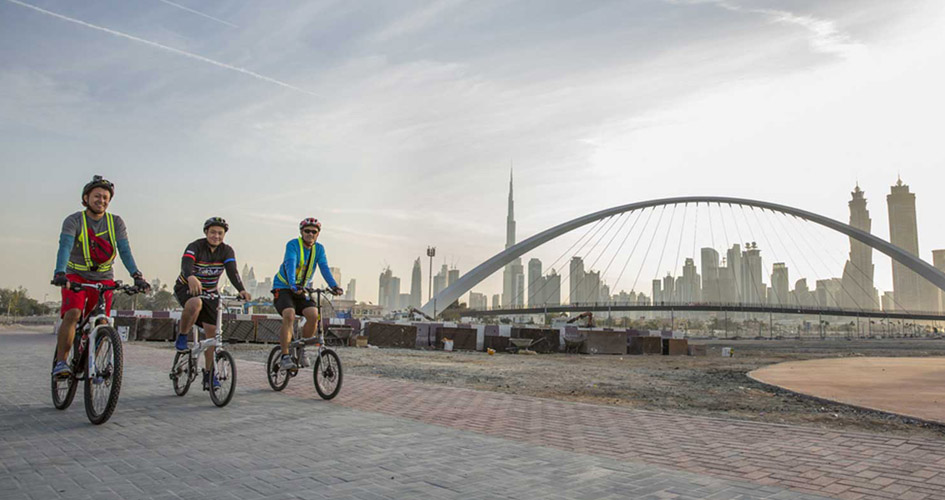 You can take a ferry from Al Gubhaiba to the end of the water canal, where the Dubai Canal water taxi station is. Such a ferry ride will be the best way to enjoy the entire length of the Creek and Dubai Water Canal. A ride from Ghubaiba to water canal will show you the complete picture of Dubai’s development. You will start from the oldest settlement of Dubai’s heritage district in Shindaga. Some of those mud-colored buildings are hundreds of years old. From there itself, if you look towards Deira side, those are the earliest skyscrapers in Dubai during the 70s.

Then as you sail forward towards the Business Bay, the cityscape gradually changes. The buildings start getting taller and more modern, the roads will be wider. When you start seeing the tip of the Burj Khalifa, you know that it is the height of modern Dubai.

The development around the water canal is still undergoing. Once it is finished, 80,000 square meters of the area on either side of the channel will turn into a hub for entertainment and upscale living. 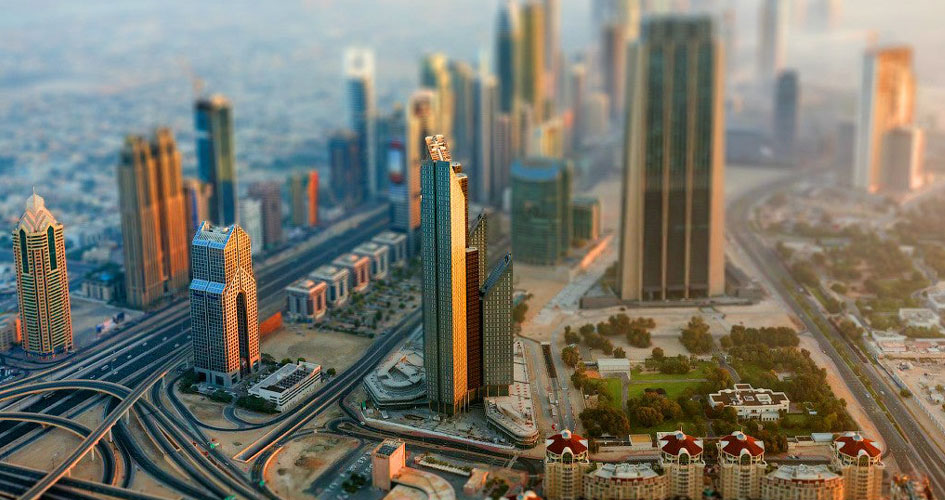 The new center of attraction in Dubai

Once the development surrounding the water canal is complete, Dubai Water Canal will surpass Dubai Marina in everything. The proposed projects include three massive developments, including the Gate Towers, Jumeirah, and The Peninsula. One of which is going to be a retail outlet sprawling over 300 thousand square kilometers and three floors with a rooftop garden and park. The peninsula will be an expansion to the existing Jumeirah Beach park which will add a kilometer more beach area to the park.

Right now, major constructions are taking place near the Marasi Business Bay promenade, and that consists of entertainment and other recreational facilities. Safa Park and Jumeirah Beach Park have also gotten an upgrade in the years following the opening. There are plans to build five thousand and three hundred luxury residences and numerous hotels that overlook the canal, though these are still in their initial phases.

There are already Dhow and Yacht Cruises operating in the canal. When you are on a Dhow cruise, you can enjoy the stunning views and a luscious buffet dinner at the same time.

Winter is the time when you see people flock to the water canal boardwalk. Although it is comfortable to walk even in the daytime, evenings are undoubtedly the best time in the water canal Walk. As the sky starts to get dark, the water canal lights up. There is light everywhere — in the water, on the bridges, the lamp posts. Even the waterfall looks like a flowing sheet of bright colors.

The boardwalk runs from the business bay to Jumeirah beach road, providing an excellent place for joggers, and for families to spend evenings. There are three pedestrian bridges over the canal. One of the footbridges called the Tolerance bridge resembles the Golden Gate Bridge in San Francisco. The Tolerance bridge connects the two sides of Safa Park. Apart from the water canal, there is a huge lagoon in Safa Park.

Dubai Water Canal Boardwalk is the perfect place in Dubai for a sunset stroll. It also doubles as a jogging track. The track near the canal is increasingly becoming a popular destination for joggers.

The promenade provides access to three bridges over the canal. As you stand on these bridges, you will adore the multicolored waterfall giving way to the boats when they arrive.

The canal is the ideal place for walkers. Every possible step has been taken to offer better amenities for those who come here by foot. There are a total of 5 footbridges over the canal. One of these is the S-shaped Tolerance Bridge which is over 200 meters long.

All of these footbridges are architectural marvels and have unique designs. The 120 meter Safa bridge hangs from two massive Y shaped piers. Metal cables connected to the piers bear the weight of the bridge floor. The third of these bridges is like a twisted-column of squares. 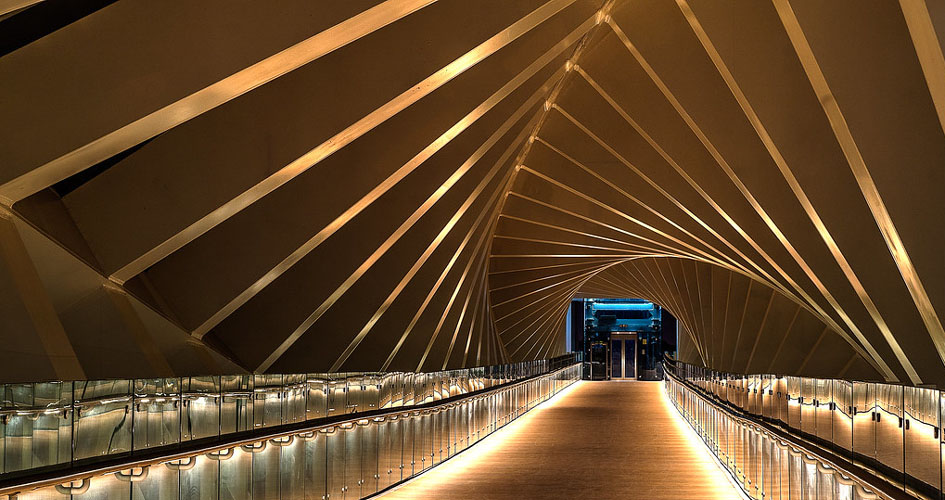 Except for the Tolerance Bridge, all other footbridges have elevator access to the top. Tolerance bridge, instead, has a sloping curve to serve the cyclists.

The Water Canal area is also going to be a gastronomer’s haven. Though there are a few great options for eating out, you won’t find as many as you will in Marina. But we hope the place will be brimming with restaurants in a few years time.

You will find fine dining options in The Atrium inside Al Habtoor city. If you want more restaurants, there are a handful of them near the Jumeirah beach area. Whichever you choose, you will need to fuel up after the long walk along the canal.

World Cut Steak House – Eat meat the old style like you were hunters. The luxury couches, leather finishes, and heavy tables give the vibe of a 19th-century hotel in the wild west.

Rose and Crown – An archetypal British cafeteria. You can even see a red telephone booth in front of it which is reminiscent of mid 90s streets in England.

Zoco – How about some Latin American dishes? Zoco, which was the first restaurant to open in al Habtoor, specializes in Mexican and Peruvian cuisine. El bruncho.

Namu – It is an eclectic mix of Japanese and Korean dishes set in a futuristic interior.

The City Grill – Stopover here for some well-cooked and juicy steaks. This one is right next to Dubai’s La Perle by Dragone theatre.

Manga Sushi – A science fiction inspired Japanese Sushi Joint in Jumeirah replete with Anime, manga comics, and Kitsch decor.
Bait Misk – A Lebanese restaurant in a vintage setting. You can have Lebanese Lamb and enjoy the view of the harbor city.

Karachi Grill – An exquisite place to try out some spicy Indian and Pakistani cuisine. 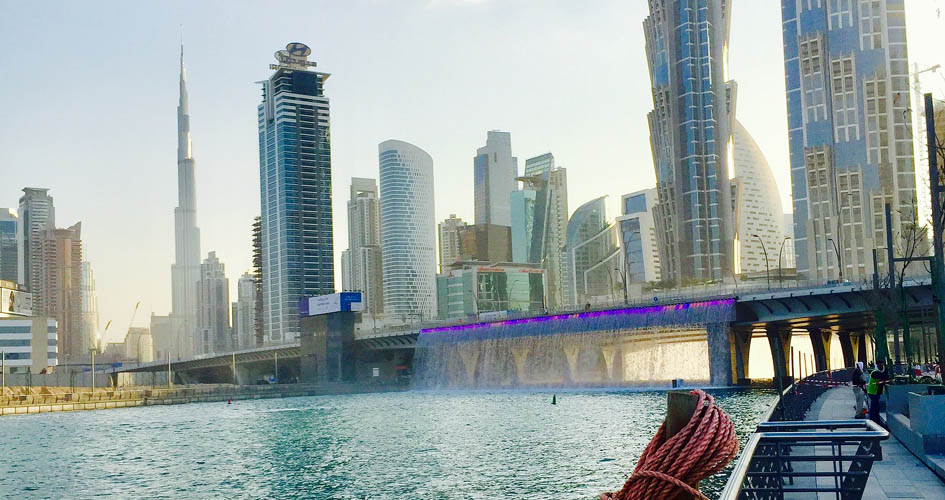 The waterfall on the Sheikh Zayed Road bridge is an important attraction in the water canal. It is on the side of the bridge that faces away from Al Habtoor City. This mechanical waterfall is flooded with purple and blue lights. When a boat passes underneath the bridge, sensors pick it up and opens the waterfall like a curtain. When the boat has passed and is far enough, the waterfall closes again. It makes use of 80 water pumps to pull the water from the canal.

Dubai Water Canal Fountain Timings: The waterfall does not run all the time. It is only from 8:00 PM to 10 PM.

How to go to Dubai Water Canal

The main highway that connects to the water canal is Sheikh Zayed Road. If you are driving south on this road, take the exit 47 right after the bridge. Then, keep driving in the right lane. This will take you to Al Habtoor City. You will find ample parking space there.

Alternatively, you can take a Dubai Ferry from Al Ghubaiba and Marina. Currently, there are six ferry stations in operation at Dubai Canal, Sheikh Zayed Road, Marasi, Al Wajeha Al Maeyah, Dubai Design District, and Al Jaddaf. And three more stations are underway. A ferry ride will cost you upwards from 25, depending on the zones and class.